We have had a light snow all day. It is beginning to feel like winter finally. Here is a photo of the beginning of the giraffe head. I put in some glass giraffe eyes -from a taxidermy supplier I have been using for over 25 years. It is a slightly strange store. I walk in and ask the woman at the counter for giraffe eyes 40mm in diameter. She asks me what kind of eyes: Quantum-vX Presige Eyes? Style 105 Bubble Eyes? What about the Optech Eyes today? Aspheric Eyes? Prerotated Eyes? I hold my head in my usual way and yell “Stop! Just give me the standard Eyes for an African Giraffe!”. While the stock guy is going to get the eyes from the floor-to-ceiling shelves of eyes somewhere in the back of the warehouse, making small talk, she asks me, so, where did you get this giraffe? I pretend not to hear her and wish her a Merry Christmas and shuffle my feet until the eyes are given to me in a discreet, unmarked brown bag and I briskly walk out never to return. Until the polar bear.

Yesterday I added and shaped the ears. I have not added the ossicones yet. But Scott, you ask, what are ossciones? You have seen two small horns on top of giraffe heads, right? Well they are not horns really but calcium deposits called ossicones. I just learned that too. Anyway, the giraffe head is on a table and closer to the camera you will see some boards that I just glued up an hour ago that will become the back of the giraffe’s head and the first one and a half feet of her neck. I will put these two pieces together tomorrow morning and then finish shaping the head and then put those two ossicones on. I’ll show you another picture soon.

Thanks again to all of you who have sent donations to support this fun project! -Scott 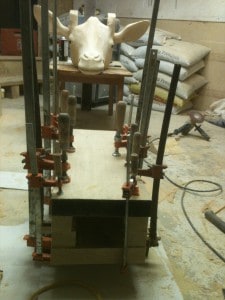