Charles I.D. Looff was one of the great carousel makers of the late 19th and early 20th centuries. A skilled woodcarver, he arrived in New York City from Denmark in 1870 at the age of 18 and by 1876 had manufactured the first carousel for New York’s Coney Island. During his lifetime, he produced carousels for parks across the nation. In 1917, he delivered a carousel to the Great Saltair Park, just outside Salt Lake City, which would eventually find its way to Nederland, Colorado.

The Carousel At Saltair 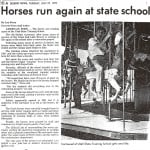 During its 42 years of operation, the Saltair carousel survived fires and wind storms. Once, it was the only attraction to survive a devastating park fire unharmed. After a wind storm, during which the roller coaster was blown over onto the carousel, it was rebuilt with two rows of animals from the original four rows.

In 1959, the park was declared bankrupt and Utah’s governor gave the Looff carousel to the Utah State Training School in American Fork, not far away. Nearby striking steelworkers and company management officers came together to set up the carousel on the grounds of the state school. The developmentally and physically disabled residents enjoyed it for another 27 years. In 1976, school residents restored the animals under supervision.

For the first few decades of the 1900s, during the golden age of carousels in America, there were between 5,000 and 6,000 carousels, or merry-go-rounds, featuring hand-carved wooden animals, usually horses. Beginning in the 1970s and continuing to the present, many carousels were sold to buyers who would then auction off the animals separately to collectors.

Currently, there is a small revival of carousel art, with many of the old carousel frames being restored and then populated with newly carved wooden animals. This is what has been done to create the Carousel of Happiness. There are now only a few hundred wooden carousels left in the United States.

The Carousel Moves to Nederland

In 1986, when the Utah State School carousel was sold to a buyer who only wanted the wooden animals, Scott Harrison, a resident of Nederland, Colorado, learned that the empty frame was still standing and available. With the help of a friend, he took it apart and trucked it to Nederland. 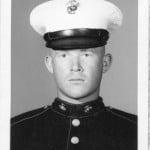 As a young Marine in Vietnam, Scott had received a tiny music box that he held to his ear to distract him from the horror of the war going on around him. The music, Chopin’s “Tristesse,” brought him a peaceful image of a carousel in a mountain meadow. After rescuing the abandoned Looff carousel in Utah, he spent the next 26 years hand-carving animals to bring it back to life.

Scott had never carved before, but starting with the rabbit that is now on the sign in front of the carousel in Nederland, he went on to create more than 50 one-of-a-kind animals, 35 of which can be ridden. As he was finishing, he created a 501(c)3 nonprofit organization, and the small community of Nederland (then with a population of 1,500) came together to raise the $700,000 needed to build it a home.

The Carousel of Happiness

The Carousel of Happiness is a blending of new and old creations. It is the spirit of the century-old carousel combined with new carvings, along with the inspiring story of Scott’s creation, that encourages a new set of smiles from young and old visitors, alike.

All the original bearings, gears, and metal work have been restored or rebuilt for continued use. A few pieces have been replaced because of safety concerns. The original electric motor and controller were retooled by General Electric to conform to modern day use.

A new floor was built using southern yellow pine, a material that was used in many original carousel floors. The wood used was cut down in 1890 and used as cribbing for whiskey barrels for a Seagram’s plant in Peoria, Illinois. When that plant was dismantled in the 1990s, this wood was resold and used as floor planks for the Carousel of Happiness.

Rounding boards, the decorative panels which surround the top of a carousel, were missing by the time the carousel was taken apart in 1986, so rounding board paintings from other carousels were donated by collector Marianne Stevens and installed. The outside set are contemporary with the carousel itself, painted by the “Michelangelo of the Midway,” August Wolfinger. The paintings were rescued from a 1910 carousel originally built for the Silver Beach Amusement Park in St. Joseph, Michigan, by Fred Dolle, Looff’s brother-in-law. They were repaired and restored by the late Denver restoration artist Edwin Friedman.

Most of the inside paintings, depicting endangered species, were painted in the 1990s by V. Vladimir for a new carousel then being built in San Antonio, Texas. But because there were only 16 paintings and we have 18 sections to this carousel, local artist Dorothy Emerling generously volunteered to paint two extra panels representing polar bears and Amur leopards.

The Carousel of Happiness opened on Memorial Day 2010 with a silent memorial to recognize the service of fallen veterans, including two of Scott’s Marine Corps friends. Our bare-bones staff is supplemented with many volunteers to help us keep an affordable ticket price, and we offer several benches and a wheelchair ramp so that the carousel is both accessible and inclusive.

The first photo above, of Charles I.D. Looff, is from family archives. The second photo is from the Utah State Historical Society. All others were provided by Scott Harrison.