These images and more are on display in the Carousel Room: This patent was awarded to William F. Mangels in 1905. The mechanism of the Carousel of Happiness was designed according to this patent. One hundred years later, the essential design of the machine remains the same, still turning the platform and allowing the animals to dance with you. Mangels arrives in the United States in 1883 as a 16-year-old immigrant. He later formed the W.F. Mangels Company which would go on to become one of the world’s largest manufacturers of amusement park rides. 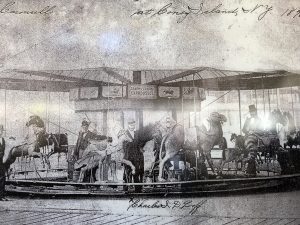 Charles I.D. Loof arrived in New York City from Denmark in 1870 as a teenager. He found work as a carver at a furniture factory in Brooklyn. Some days he would bring home scraps of wood to his apartment and began carving them into carousel animals. Young Looff assembled his wooden horses and animals onto a circular platform and created his first carousel, shown here. In 1876, he installed his ride at Lucy Vandeveer’s Bathing Pavilion at West Sixth Street and Surf Avenue. This was Coney Island’s first carousel and first amusement ride. This Charles Looff carousel was built and delivered to “The Great Saltair Park” in 1917. The pro was situated on 2,000 pylons on the shore of the Great Salt Lake. Visitors arrived on a special train from Salt Lake City. The carousel was the first attraction to greet visitors getting off the train. 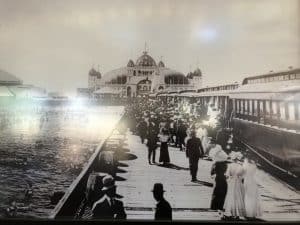 Arriving at The Great Saltair Park

Here, the carousel can be seen in front of the park’s magnificent dance hall depicted in the center of this photograph. Or, they could swim in the Great Salt Lake. This was a time when men’s swimwear required a top and some women were just beginning to wear form-fitting one-piece suits. On land, visitors dressed up for their special time at the park, men in their best suits and hats, women in long dresses and bonnets, and children in the knickerbockers and best outfits. 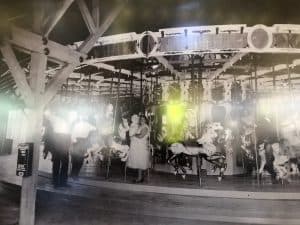 This is the Saltair carousel in its mirrored splendor. Charles Looff, the maker of this carousel, was known for using mirrors to surround the carousel and catch the light at different angles. Looff used mirrors for many carousels instead of the paintings traditionally used by carousel makers at this time. 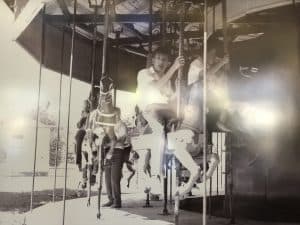 In 1959, shortly after Saltair Park declared bankruptcy, Utah’s governor gave the carousel to the Utah State Training School, a residence and vocational training facility for individuals with mental and physical disabilities. It was put in a park in the cool ground names Fairyland. In recognition of this part of the carousel’s history, community members in Nederland have made dozens of fairies that now surround the Carousel of Happiness. 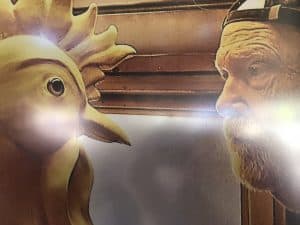 The Rooster Meets His Maker

Nederland carver Scott Harrison stares down one of his creations in his workshop. In 1986, Charlotte Dinger, a private collector of carousel and wooden carousel animals, bought the carousel and removed its wooden animals to be sold separately. Scott Harrison learned that the remaining carousel structure would be sent to a scrap metal yard. He quickly bought it, as pictured here in this photograph. Scott and his friend spend two weekends taking it apart and bringing it back to Nederland. Disassembly of the Looff

While at the Utah State Training School, the carousel had it’s own roof that pratfalls protected the mechanism from the weather. Here, the carousel roof structure is being taken apart for the move to Colorado. 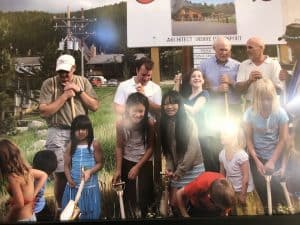 The carousel’s distinctive, 12-sided building was funded, designed, and built with the help of hundred of people. The carousel’s “twirling girl,” Eliana Dreyfus who was visiting from her home in Switzerland, participated in the ground breaking on July 25, 2008. Nederland’s mayor has since declared it “Twirling Girl Day.” The Carousel is Assembled

As the building was being finished, the carousel was assembled using new wood, paint, and original metal parts, all cleaned and ready for action. Here, the tiger waits patiently for his friends to arrive. 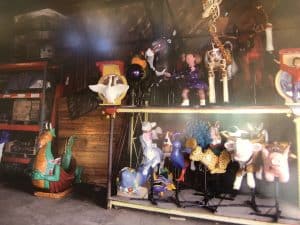 The animals, along with floor panels and other parts of the carousel, spent years in storage at a mining supply warehouse in Nederland, part of the old Wolf Tongue Complex. Soon after the carousel building was finished and assembled, the animals paraded the few blocks to their new home. A Coyote is Carved

This coyote is getting his fur a few hairs at a time. A variety of carving tools are used to create each animal. Knives, chisels, gouges, wooden mallets, and power tools are all used to make the shapes. Eventually they are painted, but it’s only when you come to visit that the animals really come to life.

The Carousel is thrilled to have been accepted as a participant in the King Soopers Community Rewards Program! King Soopers has dedicated more than $2.5 million per quarter for participating registered nonprofits. Now you can support the carousel while buying[read more]

Get All the News!