It was late July now, and I had finished shaping the chimp for the most part. I would soon start carving his features and defining his fir. At the end of the day, I had the last block of wood, which I was pushing through my band saw in order to make a rough outline of his thumb. I was a bit tired and pushing a bit too hard, trying to not only cut through the 4-inch piece of wood but turn it as I went, and before I could even open my mouth to yell, I had pushed through not only the chimp’s thumb but into my own. Yikes! I quickly got in the truck, got Ellen, who was working in the garden at the carousel, let her drive, and we went to the ER. I got stitches and realized that in that instance at the band saw, without meaning to, the chimp and I became blood brothers. Not that I remember, by the way, that HE shed any blood in the process. I guess he just didnt have it in him. But, two things happened, first, we became closer as pals, both having parts of our bodies go through the band saw, and most importantly, I remembered that one should not use power tools at the end of the day when one is tired.

Here is his hand getting the thumb glued on before being attached to his right arm. 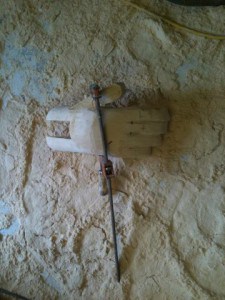