The guy has arms now. As I was working on the chimp, taking his limbs off and on, with him sitting there, I was thinking fellow vets who had lost their arms and legs in war and then were sitting patiently while specialists refit them with new ones. In early 1968, while in a US Naval Hospital in Yokosuka, Japan, I and other patients, when they were ambulatory but still getting treatment, worked with other war injured who were in early stages of rehab. I worked with brain injured young men and also those with missing limbs. Strangely enough, the chimp, as he was sitting there, took me back to those memories, for better or worse.

In this photo, he looks out the large sliding shed door, patiently waiting for the chance to feel the sun instead of just looking at it. Or is that just me? 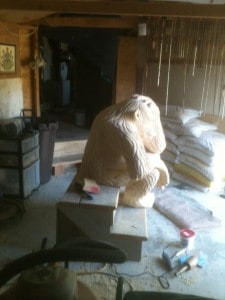