Today I finished painting Oberon. Well, almost: I still have to work on the little pink swatch on his nose which mirror’s Oberon’s real nose. It reminds me of the scar on Harry Potters forehead.

I had fun carving this dog. This is the first animal, after carving 63 of them, that I have used spray paint. I wanted to add some gradual color to his paws, tip of his tail, and his muzzle, but needed to spray on a bit of brown. I drove all over Boulder looking for a water-based spray paint and finally found just what I wanted. Hope

I asked Oberon’s guardian, Bruce, to write something up for our end-of-year newsletter about Oberon and his relationship with the dog and he wrote up something which I will add to the next post in a few minutes to which I will add another picture.

I am not going to put Oberon up on the Somewhere Else wall for a while since I am working out exactly how I am going to plaster the wall and the position of the dog (and other sculptures) depends on some decisions on the plaster wall thickness.

Now on to the next one, the giraffe! 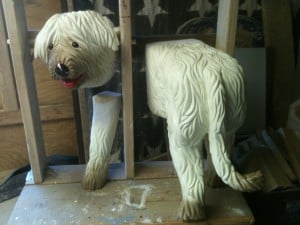